Solid State or Hard Disk: Which Should You Choose?

As a business that relies on or drives technology, the best equipment is key to success in any industry. How do you know which hardware is the best for your business? Let’s take a look at one of the basics of computer hardware, the two different types of drives. We’ll look at each drive, then compare the two so you can make the best decision for your business or IT department now and in the future. 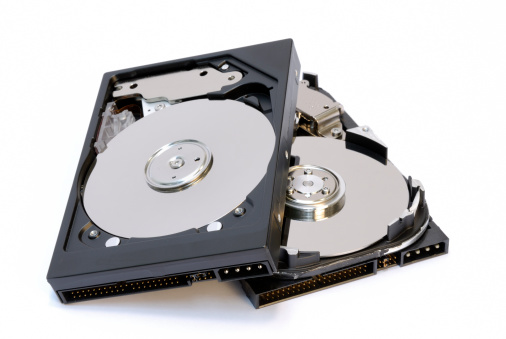 The first things to know about computer drives is that they store your precious information in very different ways. That said, each drive has its own positives and negatives, and deciding on the best drive for your business depends on what your computers or devices are being used for.

What is a Hard Disk Drive?

Hard disk drives (HDDs) are the original drives; solid state drives didn’t show up on the scene until much later. HDD are made up of one or more magnetically sensitive platters that look like DVDs. Each platter has an actuator arm with a read/write head and a motor to spin the platters and move the arms when necessary. The I/O controller and firmware lets the hardware know how to function and also communicates with the rest of the computer or device.

How Do HDDs Work?

Just like DVDs and CDs, the platters have tracks or concentric circles. The tracks consist of sectors that each have unique addresses used to locate and organize the data you put on the computer or device. Firmware efficiently detects and corrects data errors before writing it on the platters utilizing an algorithm. Preset speeds for home use HDD platters are 4200-7200 rpms, although they will be higher for businesses who need higher read/write rates to process data faster.

What are the Drawbacks & Benefits of HDDs?

HDDs have several drawbacks due to the mechanical pieces that find data, as they can break. Additionally, finding data this way is more time-consuming than electronic methods, like those the solid-state drives use. Just like a record player, HDDs can skip or refuse to work at all if they are dropped suddenly or not taken care of. Laptops are particularly susceptible to this issue. HDDs are generally less expensive that SDDs and have the same amount of storage space or more.

What is a Solid State Drive?

A solid state drive (SDD) is newer than HDDs and rely on non-volatile memory to store data electronically. Non-volatile means the data remains on the device or computer when it’s turned off. SDDs resemble USB drives but are more substantial. Both pieces of tech use the same technology to function, known as NAND. NAND is flash memory that stores data in gates organized in a grid pattern. Blocks are composed of grids, and grids are composed of pages. Instead of a read/write arm, the SSD controller keeps track of data locations.

SSDs use a more complicated process to update data, and all data in a block must be refreshed at once if any is updated. Old data is erased after being moved to a different block, and new information is rewritten with changes in a new block. Whenever an SSD drive is idle, “garbage collection” completes this process of throwing out the old while bringing in the new. TRIM prevents premature wear and tear on an SSD by noting when rewriting can be skipped with some data.

What are the Drawbacks & Benefits of SDDs?

SSDs have their own set of drawbacks and benefits. SSDs are more expensive than HDDs due to new technology, and it can be challenging to find enough storage on SSDs if you need a significant amount. In general, HDDs may hold about 2.5 times more data. SSDs are fantastic for games, apps, movies, and videos because they load much faster, weigh less, and can withstand more abuse. SSDs are much cooler because they use much less energy than HDDs.

Should You Choose and HDD or an SDD?

If you need large amounts of storage and are not concerned about portability or video or gaming capability, HDDs are best for your line of business. If you’re more video or gaming focused, then SDDs may be right for you. Ultimately, the individual demands of your particular business will help you decide which type of drive to use, or whether you need to migrate to a different kind of drive to accommodate your business.